Get the inside line on what’s unique, special and new near you, straight to your inbox across 28 counties

The Muddy Guide to Half Term Part II

Hmmm, you’ve reached an older feature - let’s get you up to date! Read our latest What's On features here.

Loads of fantastic things to see and do this week. Have fun and let us know if you make it to any of the events – I LOVE feedback so please use the Comment box at the end of the feature to give your reviews.

Wilderness at The Ashmolean, Oxford, Fri 31 May

I can’t help writing about these live events at the Ashmolean every month because they’re so utterly fantastic. I went to the Wilderness festival last year in Oxfordshire (see my review here) and now the madness will be descending on the hallowed rooms of the Ashmolean as part of the museum’s Live Fridays. There’s Philosophy Slamming with The School of Life, The Idler Academy performs an informal musical lecture on Merry-Making, there’s harpischord players in full Baroque dress, jester from The Village Hall and basically a whole lot of eccentric fun. I’m so there I’m virtually teleporting.

My parents have a photo of my brother, aged 5, at the top of a massive willow tree in our garden. He’d scampered up in minutes and was proudly grinning with the best view in the village.  Those days are long gone – we start to panic when our kids step onto the first branch – so these days it’s harnesses and hard hats on, and off to ‘tree climbing workshops‘. Still, good on Cliveden for getting kids outdoors and up into the canopies at all. Coordinated by the Big Tree Climbing Company, there’s the climb itself, some zip wire action and a rope swing on which to practise the Tarzan swing from your youth because yes – adults must accompany the kids at all times. Each session is 30 mins long and costs £17.50. Not cheap, but then neither is Cliveden. 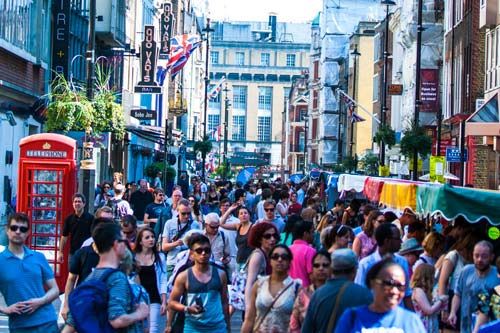 I met some fantastic interior designers/decorators the other day (of which more in a different post) and they were going crazy for this Soho Flea Market. It’s been going for a couple of years and creating an ever bigger buzz. The entire Dean Street will be closed to traffic from 12pm – 8pm and Soho Flea Market’s specifically-curated ‘creative market stalls’ featuring artisans, artists, fashion designers, jewellery designers, and filmmakers will exhibit and sell their works directly to the public. Should be great fun and with Hyde Park a skip away you can take the kids too.

A brand new arts festival set in the beautiful surroundings of the Chilterns Open Air Museum. It’s like a mini Bucks Open Studios (indeed, it’s in association with BOS) with various artists such as Laura Boswell, above, demonstrating their skills. But there are also several writing workshops and also a lovely sounding interactive art event for kids. For £2 children can create a 3D willow sculpture decorated with ribbons and yarns, make a sketchbook, draw with pastels, charcoal and graphite pencil and canvas paint using brush, sponge and dribble techniques. A lovely family event by the sounds of it and one earmarked by the Muddys this weekend.

Yeah yeah, I know it’s all about the animals, but sometimes kids just want to clamber over some wobbly wooden boards and dangle off some ropes. Whipsnade is onto this, having already completed an indoor playground earlier this year. Now it’s just opened a spangly outdoor area for when the tigers and wolves just aren’t cutting it. Well you have to admit, that slide does looks fun.

Since Highclere Castle took the starring role in Downtown Abbey, it’s been awash with tourists – so many that pre-bookable tickets for the Summer have already sold out. If you want to take your chances, there are some walk-up tickets available each day, with a suggested time of 2pm onwards.

However, there are also exclusive private tours of the castle from 4-6 June, featuring a short welcome (and a patrician ‘Ta very muchy’  for the £100 entrance fee!) from the Countess of Carnarvon, followed by a tour of the main state rooms and castle bedrooms, and a browse through the Egyptian Exhibition which contains relics from the Egyptian tomb relics discovered by the 5th Earl of Carnarvon and Howard Carter. You’ll be pleased to know that complimentary refreshments will be served, along with a free signed copy of The Countess of Carnarvon’s book Lady Almina and The Real Downton Abbey before you are gently directed to the Castle Gift Shop. Ker-ching!

I’m a great admirer of the Old Fire Station shop which made my Muddy Awards ‘Best Gift Shop’ final. If you are too far away from Oxford to visit, just pad over to your computer instead as the lovely gifties are now all online here.

If you haven’t already been along for a sneaky peak, Winser fashion (featuring the lovely Yasmin Le Bon as model though, er, not in this shot) arrived in Gerrards Cross as a pop up last month and there are just weeks to go until it pops off again. The clothes are cool and grown-up and designed to work for more than just one season, and they’re not crazy expensive either – think Paul & Joe and Whistles. The dress above, for example, is £250 but many items fall well below this. Worth a little fashion detour if you’re in that neck of the woods  – Odds Farm, Black Park, Stoke Poges and The Chilterns Open Air Museum all within spitting distance. Just saying.

Festival of Neighbourhood, Southbank, until 28 Sept

Every time I go on the Southbank Centre website I come away dazed at the amount of stuff I want to see. This Festival of Neighbourhood, which started a couple of weeks ago, is brimming with amazing, inventive stuff to inspire adults and children alike. I love Shlomo’s Beatbox Adventure for Kids, the London Literature Festival, Yoko Ono’s Meltdown featuring the return of Siouxsie and so much more … Have a look at the programme here and start plotting your trips to London.

PLUS don’t forget the Muddy picks from last week that are still time-relevant! I’ve pasted them below so you don’t have to revert to the previous Guide. I know, I’m nice like that.

Love the idea of this great new attraction at Warwick Castle – Horrible Histories, Foul Fayres – which is bringing the foulest and funniest moments from five eras of history to life this half term. I saw something similar at the Tower of London last year and it works incredibly well for kids.

Try on some chainmail with the Stormin’ Normans, watch out for the Terrible Tudors and Henry VIII, who’s on the lookout for another wife; or go to school with the Vile Victorians. Also check out the raising of the portcullis, watch the Warwick Warriors show to see just what you need to do to be a medieval knight; see the firing of the mighty trebuchet; meet the Great Dragon The Dragon Tower, and watch the Flight of the Eagles, a spectacular birds of prey display. For more info, visit www.warwick-castle.com.

You had me at ‘wine’. I can’t pretend to be much of an expert on English wine but I suppose that’s the whole point!  Check out the website for tastings, vineyards and events.

Tell us what you think Cancel Reply

For the best things happening in Bucks & Oxon

1
8 gorgeous gardens to visit this week
Things to Do

4
The Chilterns: home of epic family days out & mini-breaks
Things to Do